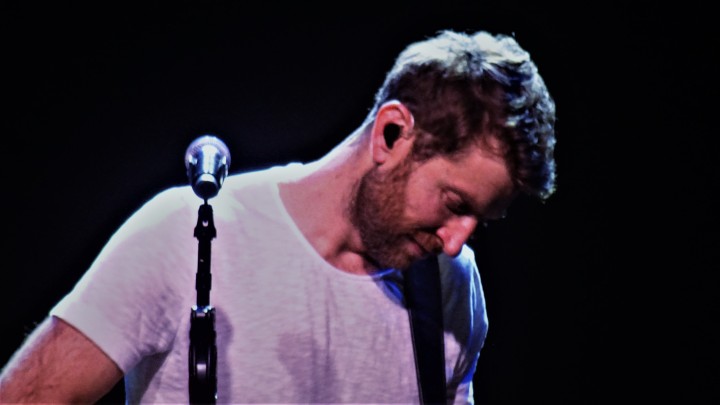 For a moment lets take it back to my first experience of Brett Eldredge, long before I even had the honour and privilege of seeing him live. There is a song he released that I feel a strong pull towards, a song that tells a powerful story and a song that he so beautifully recorded. Since hearing that song, a track titled Raymond, I was hooked on his music. Thankfully I was at Country to Country last year when Brett made his first appearance. There were a lot of highlights to his set but to hear Raymond live for the first time is an experience I will never forget. Ever since that evening, that breathtakingly beautiful performance I vowed to listen to more of his music, to learn more of his story and to see him again as soon as the opportunity presented itself. During the recent months Brett has been focused on his upcoming album.

The crowds were eagerly awaiting Brett to take to the stage, cheering and encouraging the Illinois native to take centre stage. It was a Monday night in the city of Manchester but there was no sign of Monday blues on the faces of the crowds throughout the O2 Ritz. It was his first time performing in Manchester, but his third visit to the UK and it was obvious that everybody had been just as excited as I was about this show. He opened the set with a completely new song, a track called Good Day a song that seemed to set the scene for the rest of the show. The american singer-songwriter then made an announcement, one which once again gave the crowd a taste of what was to come ‘”We’re gonna get wild tonight” he said before moving on to two tracks that everybody was singing along too Somethin’ I’m Good At and Don’t Ya.

It was clear that Brett was excited to be touring the UK , his interaction with the crowd throughout his set which lasted a little over an hour and a half shown us all just how thankful he was. A clear fan favourite was Love Someone, the crowd was swaying from side to side as they sang along to this incredible track. Most of his set did focus on his existing repertoire however on a few occasions Brett gave us an taster of his new music, Crowd My Mind was the second new track he let us experience. Weeks later I still can’t find the right words to explain the impact that song had on me – you could hear the emotion in Brett’s voice, I was left speechless, it was a wonderfully powerful ballad. The story behind the song is one that the majority of the population will relate too whether it be romantically or not, its about not being able to get somebody of your mind (Aw!)

A rousing cover of Queen’s Crazy Little Thing Called Love arrived before Brett stripped things down for two acoustic songs – Raymond and The Long Way. Raymond, a song about Brett’s grandmother battling dementia, is truly heart-breaking when played acoustic and I’d be lying if I said I wasn’t struggling to hold back the tears. The Long Way picked up the mood slightly and it made me yearn for a solo acoustic record from Brett in the future. One of the night’s surprises came next when Brett covered Billie Eilish’s When The Party’s Over. On paper it shouldn’t work but in reality it was a real highlight, and dare I say Brett’s version was preferable to the original?

A storming rendition of Lose My Mind led into the night’s final new song, Magnolia, before a mash-up of The Reason and The Temptations’ My Girl had the audience singing once again. The triple punch of Mean to Me, Fire and Wanna Be That Song continued the sing-a-long before Brett left the stage. He returned minutes later for an encore that consisted of a gorgeous piano-led rendition of One Mississippi and an energetic performance of Beat of the Music.

Once the end of the night arrived, Brett bid farewell to the crowd and emphasised how special the night had been to him. With three visits under his belt, I expect Brett will play even bigger venues on his next tour. As a performer he’s energetic and incredibly giving, and as an artist he’s endearing and compelling. His infectious energy is at the centre of everything he does and I left the show excited about his next album and feeling lucky to watch his incredible rise to superstardom.

As this post is a little delayed due to a number of reasons I would also like to add that his new album is set for release on July 10th 2020 with a number of tracks available to stream now, including Crowd My Mind, which he played during this concert. If you haven’t already head over to your favourite streaming platform and download the pre-released tracks, you won’t be disappointed!

Tell me about one song that speaks volumes to you?

PS: Sorry I didn’t cover Lauren in this, I was so excited to finally see her live that I got lost in the music – but I can tell you she was absolutely incredible!

This site uses Akismet to reduce spam. Learn how your comment data is processed.